In the last three years or so, thousands of peoples from different walks of life and organizations of various advocacy took action to prevent what could have been one of the biggest corporate traps of the 21st century. We held community dialog, wrote letters to our congress representatives, picketed the parliament, and trooped to streets with banners aloft and fists clenched to defeat the Transpacific Partnership Agreement.

A collective sigh of relief was heard around the world following US President Donald Trump’s decision for the US to withdraw from the free trade agreement last January. Trump’s pronouncement was merely a formality, however. Matter of fact, the deal crumbled on its own weight with the resounding rejection of the public and lack of support from politicians fearing electoral backlash.

But is the TPPA dead? Not really.

Australia, New Zealand, and Japan are keen to push through with the deal even without the US in the hopes that Washington will eventually rethink Trump’s “America First” trade policy.

“The basic idea is that we would like the United States to come back as soon as possible, which would mean the original TPPA would have to be ratified,” according to Japan’s chief TPPA negotiator Kazuyoshi Umemoto.

On Sept 21-22, the TPPA-11 countries met in Japan to identify the clauses to be mothballed. A broad agreement is expected to be reached in November at an Asia Pacific Economic Cooperation (Apec) meeting in Danang, Vietnam.

State of play of the negotiations

Civil society and people’s movements groups oppose the TPPA because it gives pharmaceutical companies monopoly market over life-saving medicines and delays the availability of cheaper forms of those medicines. It accords foreign investors special rights to effectively circumvent national courts and sue governments for millions of dollars in foreign dispute tribunals over domestic laws. It also violates the policy space of governments by restricting their right to reevaluate the deregulation of essential services despite demonstrated market failures. These demands are mainly driven by US agenda towards greater corporate rights at the expense of people and their sovereignty.

Many of the 11 other governments only conceded to these agendas because of the promise of greater access to US markets. Absent such a benefit, countries such as Malaysia and Vietnam are now demanding the review of the terms of TPPA. At the negotiators’ meeting in Sydney in August, Vietnam demanded shelving the intellectual property (IP) provisions in the original pact. This may further be renegotiated if and when the US decides to join the trade deal in the future.

Negotiators also need to work on how to ratify the deal. The original pact required ratification by at least 6 countries accounting for 85 per cent of the combined gross domestic product of members. That condition cannot be fulfilled after the U.S. exit and would need to be revised.

Interestingly, China and South Korea — two of the major players in the rival Regional Comprehensive Economic Partnership (RCEP) negotiations —attended the Chile ministerial meeting with the TPPA parties in March. According to the online group Watchblog, there is at least a possibility of future negotiations between TPPA and RCEP countries.

Apologists of the TPPA are hard selling the positive gains of TPPA for the remaining 11 countries even without access to the giant US market. The Japanese National Graduate Institute for Policy Studies has published a research on the benefits of the TPPA-minus US, and this is being widely used by Japan and other TPPA governments to promote the deal.

Such claims were refuted by a new study released by the United Nations Committee on Trade and Development (Unctad). The UN paper shows that the economic modeling used in the Japanese paper rests on unrealistic assumptions that conveniently disregard the negative outcomes from trade agreements. These assumptions include that TPPA will have no unemployment and no trade deficit effects, which are in fact two of the main real-world negative impacts resulting from trade agreements.

The UN study also shows that the paper vastly exaggerates the positive economic outcomes resulting from removal of non-tariff measures in the TPPA while ignoring the broader economic impacts of chapters on intellectual property, investor protections, government procurement, and state-owned enterprises, among others.

A zombie TPPA is worse

Many of the so-called economic benefits that TPPA supposedly had to offer were premised on the advantages to be gained from trading with the US, and even these were offset by the economic costs of the deal. These rules, such as on patent, copyrights, and an investor-dispute mechanism were specifically included upon US insistence. With US out of the picture, TPPA-11 will shoulder the costs of patent, copyright, and investment rules, but none of the promised benefits.

“Much of the TPPA text was drawn from the US template. Updating it for a new deal without the USA would be in the interests of the US, but not in our interests. We’d be better off starting from scratch and developing a new type of fair and sustainable trade agreement,” according to New Zealand Green Party MP Barry Coates.

The struggle against TPPA is thus not yet over, but needs to be intensified as zombie TPPA-minus US proves to be worse than its predecessor. Nothing less than a powerful broad mass movement of peoples will be capable of finally delivering the fatal headshot at the undead free trade deal. 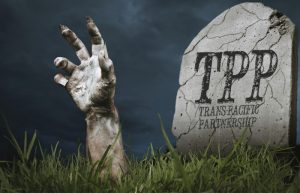